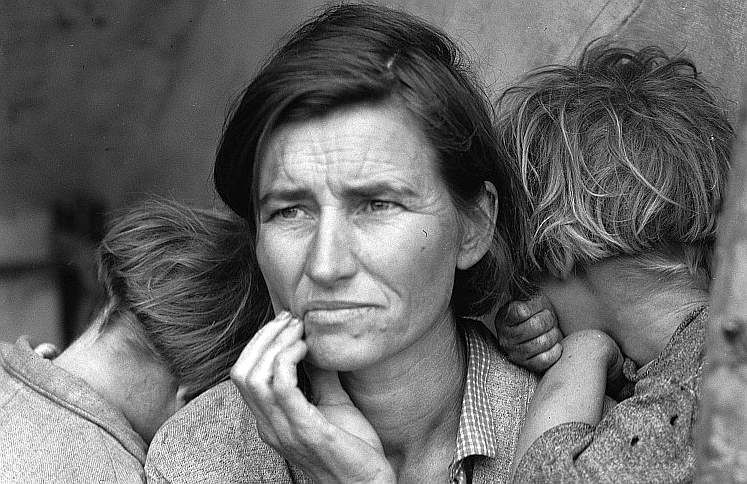 “The good photograph is not the object, the consequences of the photograph are the objects. So that no one would say, how did you do it, where did you find it, but they would say that such things could be.” —Dorothea Lange

The core selection of the historical photographs in the archives comes from the Farm Security Administration collection in the Library of Congress.

In 1935, Roy Emerson Stryker, a Columbia University economics instructor, was appointed head of a special photographic section of the Resettlement Administration, a New Deal agency set up to aid farmers impoverished by drought, soil erosion, and the effects of the Great Depression. This agency later became known as the Farm Security Administration (FSA).

From 1935 to 1942, Stryker and the photographers employed by him created 77,000 black-and-white documentary still photographs, capturing an unmatched portrait of the land and people of the United States in a period of profound change. Stryker’s mission was to document the human catastrophe in the heartland to underscore the urgency of the FSA’s work and still the voices of the agency’s enemies.

Stryker’s genius lay in tapping a team of photographers with soul—men and women who could translate thoughts and feelings into pictures. Some of those who worked for him, notably Dorthea Lange, Walker Evans, Carl Mydans, Gordon Parks, and Ben Shahn, would achieve great renown.

The FSA photographers were sent out on assignment throughout the United States and Puerto Rico, often on the road for several months.

Given specific subjects and geographic areas to cover, before beginning their task they would make a detailed study of the region they were bound for. They went into the field with an educated, understanding, and compassionate view of their subject.

The result of their work, an unprecedented collaboration between government and the arts, is an enduring legacy of life in America without which we would all be poorer.

Three related drought refugee families stalled on the highway near Lordsburg, New Mexico. From farms near Claremore, Oklahoma. Have been working as migratory workers in Calfornia and Arizona, now trying to get to Roswell, New Mexico, for work chopping cotton. Have car trouble and pulled up alongside the highway. "Would go back to Oklahoma but can't get along there. Can't feed the kids on what they give you (relief budget) and ain't made a crop there you might say for five years. Only other work there is fifty cents a day wages and the farmers can't pay it anyways." One of these families has lost two babies since they left their home in Oklahoma. The children, seventeen months and three years, died in the county hospital at Shafter California, from typhoid fever, resulting from unsanitary conditions in a labor camp   Photo: Dorothea Lange

RIDING THE RAILS: TEENAGERS ON THE MOVE DURING THE GREAT DEPRESSION by Errol Lincoln Uys