Michener brought a notebook to the table; I had a ruled scribbling block in front of me. I'd arrived with a carload of books from my library that offered a broad, popular and objective background to historical and contemporary South African figures and issues, as well as a ready reference for the many topics we would cover. Thus armed, we went to work on the novel.

One of the first keys we sought was the locale and "movement" of the story, essentially on an axis from Cape Town to Zimbabwe. We mapped out twelve stages along that imaginary route coinciding with the periodicity of South African history, essentially the unfolding of the frontier as settlers penetrated north. A movement that would, of course, come up against a counter migration of Xhosa and Zulu flowing down toward the south.

Before these "hard" dates, there would be scenes set on the living veld eons before man's arrival at Vrymeer (Lake of Freedom,) home to Australopithecus and later Bush people (San) remembered in rock paintings in the hill caves of Vrymeer and its lovely lake, where Mal Adriaan van Doorn is first of his line to behold a promised land.

With this big picture in our sights, we could get down to the essentials: This we did chronologically, literally working our way through the decades of three centuries-plus of South Africa's recorded history, making stops in years and at events where we saw a role for our Van Doorns, Saltwoods and Nxumalos and those around them.

I have pages from my original scribbling block with penciled notes I made as Jim and I sat talking. - Names, dates, lines, squiggles, scratches and scrawls, which were subsequently transferred to a second and tidier pencil draft, then a third "yellow page" draft, a fourth revision of this, and finally the draft "Outline" to which Michener specifically refers.

The Covenant: Plotting the apartheid chapter in the novel

It was my idea to show the effect of apartheid on South Africans of all races with six vignettes of segregation and personal laws that affected citizens from birth to death. Key elements that would finally appear in the novel are in the scribbling black jottings above.

2) Race Classification - Coloured child. "She was trying to be what she wasn't" + 1972 (Jotted down is a rough genealogical table that shows linkage between Van Doorns and the descendant of a black slave)

These jottings, even the more detailed plotlines in the typed-up synopsis, can only offer a glimpse into the hours of talk between Michener and me. Easily twelve and closer to fifteen hours a day, sweeping back and forth across the centuries, chasing down ghosts of the past to bring back to life in the pages of the novel. If there was one thing that drew us to each other immediately, it was this indefatigable staying power and drive, the ability to totally immerse ourselves in our subject and the lives of our characters and to block out the rest of the world. As Jim would later recall:

Never once did I say, 'So now we have this Englishman at the mission station in 1819. How does he get to the Orange River?' without Uys having nine or eleven possibilities, all good, all logical, all beautifully coordinated. Often I would say, 'too complicated for our boy,' or 'I doubt our boy would go so far,' but just as often I would say, 'That might be just what he'd do.'

The Covenant: Naming the characters in the novel

These early scribbling block scratchings bring crystal memories of our plotting sessions. I see names of characters jotted down and recall the thinking behind a particular moniker. The surname "Van Doorn" was Michener's pick and a good one for in translation, "doorn" is "thorn," and surely there would be Van Doorns meriting the description.
Our Huguenot family of de Pré was prompted by a family manuscript I have that begins: "This is my true and real life story. My name is Leonora Du Pre. I was born in the year 1892 on a farm in the Cape province (sic)." Joey Uys and "Leonora duPre"My mother, Joey Uys, was author of this fifteen thousand word manuscript written at my urging years earlier. Joey felt more comfortable with a nom-de-plume, though it's also worth noting that her mother's ancestors were actually Huguenot "Jordains," a name I suggested for Visitor Jordain who comes to the Cape with Paul de Pré and the other refugees.

As any writer knows, names can be critical in shaping a character in one's mind. So, for example, in the talk that led to "Mal ("Crazy") Adriaan," I named "Adriaan," for a whacky Afrikaner cousin, and similarly, Lodevicus "the Hammer" for an erstwhile colleague with a violent nature, the fictional Lodevicus becoming the scourge of the frontier Xhosa.

There's a Marius van Doorn in the apartheid era, a good man whose image was derived from another Marius I knew in Cape Town - Marius Barnard, an enlightened Afrikaner surgeon who saw the writing on the wall long before others did. If I look at the Saltwoods, I see Anthony and Susan and Clara, Roger and Timothy, Michael and Craig, and Marius Van Doorn and Claire Howard, all with a very familiar ring in my circle - names I jotted down on a check book deposit slip used as scrap paper amid the plottings!

The Covenant: Core themes of the novel

At the end of the first week, I moved out of the studio to spend the weekend in a hotel at St. Michaels, Jim and Mari having guests who were staying over. Over the three days, I wrote what I call the "yellow draft," my first outline for the book that incorporated the broad ideas from our initial exhaustive sessions, plus additions of my own that occurred to me as I worked with the notes I'd jotted down.

The plotline is chronological with dates of characters' births/deaths/ marriages and significant events touching their lives, both historical and personal. The first family trees for the Van Doorns, Saltwoods (Stanworths) and Nxumalo's appear here, as well as my first notation for a possible title: Covenant.

The clean-typed yellow pages provided the basis for our second four-day brainstorming. Once again, we began at the very beginning, as I note in this synopsis's "Chapter One:"

"Creation: The Diamond, the land, from dawn of time... to the arrival of Early Man. Emphasis on the mystical/almost supernatural value of the Diamond. Site: Present-day Blinkfontein - "sparkling fountain" - farm."

I've crossed out "Blinkfontein" and replaced it with a new name for the farm: Vrymeer, an Afrikaans word meaning "Lake of Freedom." This was a far more meaningful title for the property of the Van Doorns given the irony of a land where the struggle for freedom had been and was then still so bitter a battle. 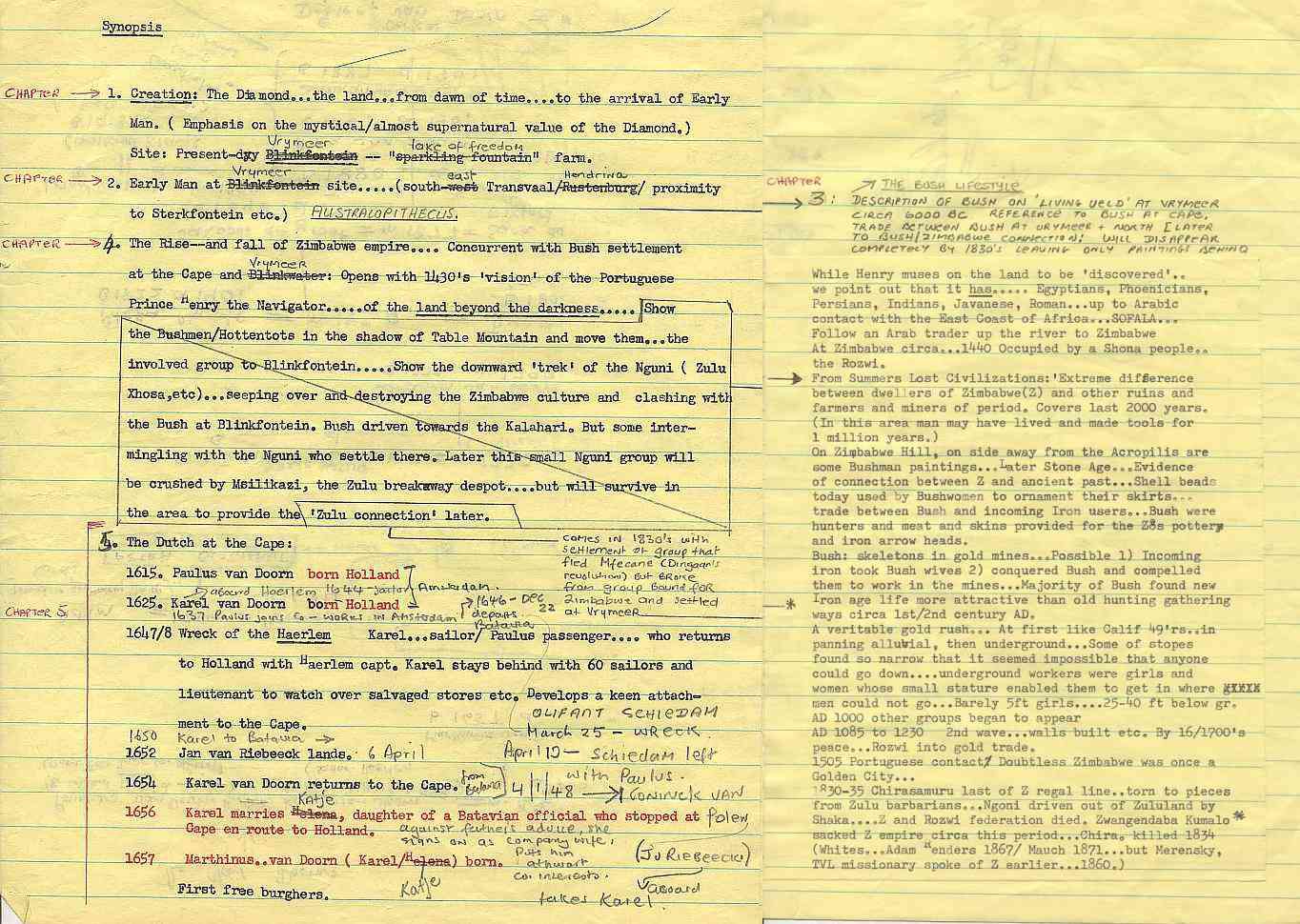 Glancing over the yellow draft today, I get echoes of Michener and me shaping core themes that stayed the course of the novel: The Bush people (San) on the living veld at Vrymeer, their connection with Zimbabwe and the Cape; Portuguese Prince Henry the Navigator's vision of the "land beyond the darkness;" the "gold rush" of great and ancient Zimbabwe; the timing of the southward “trek” of the Nguni (Bantu)and its importance in debunking the empty land myth; the Hedge of Bitter Almond at the Cape and heavy symbolism of "separatism;" the total break between Mal Adrian and the Cape van Doorns in 1728, "presaging later divisions in the ranks of Afrikaners and the split between a “liberal” south and “verkrampte” north (literally, cramped or narrow-minded;) Adrian's tremendous vision of Southern Africa stretching to the Zambesi, and from ocean to ocean; the black "Boers" of the South African War; Detleef van Doorn's "education," his rise through the ranks of Afrikanerdom and work as architect of apartheid; Moses and Daniel Nxumalo from 1948 to Soweto 1976, with Moses as servant of the Saltwoods, among other steps on an epic road.

And our thoughts on the conclusion: "Probably around Vrymeer... Nearby a splendid diamond is found. Not the one in the creation. The reader knows that it exists but it will not be found. It is symbolic of the notion that Africa herself is Master of all destinies here... The American to be introduced at a later stage. A geologist who makes the discovery of the diamond... He has been working in an African state for a company with ties to South Africa's Anglo American. About to return to U.S., he is offered a geology post in South Africa for one year. Provides opportunity for "outsider" view, desperately seeking answers to the race questions that plague him... and the threads that must lead to the diamond pipe on Vrymeer.

Here, too, I expanded my thoughts for the Apartheid chapter scratched out on the scribbling block:

After death of Detleef content that he has protected South Africa . What did Detleef's Grand Design mean in the lives of citizens:

• BORN... Immorality Act.Case history. 1950 Act: Colored/White, see English family.Craig, age 20, student at University of Witwatersrand to Cape Town for December vacation. At Clifton Beach meets Shamilah Boordien, daughter of Cape Malay builder and wife. Summer holiday affair, meets parents, house Signal Hill etc. She is at UCT (before University of Western Cape.) She has been involved (with white) once before. On Clifton Beach does not "play white" but flaunts Apartheid. Craig takes her to Radnor-style hotel (*ELU= hotel where I stayed while living in Cape Town in 1964.) Housekeeper blows whistle on them. Arrested under Immorality Act. He gets suspended sentence; she is jailed. After her sentence to Canada-family there.

• WHERE YOU ARE... Group Areas mass removal..1950 Act. Mass removal of Indians from Johannesburg

Starts with ambulance apartheid
Man, black, knocked down and ambulance, whites-only, refuses to pick up